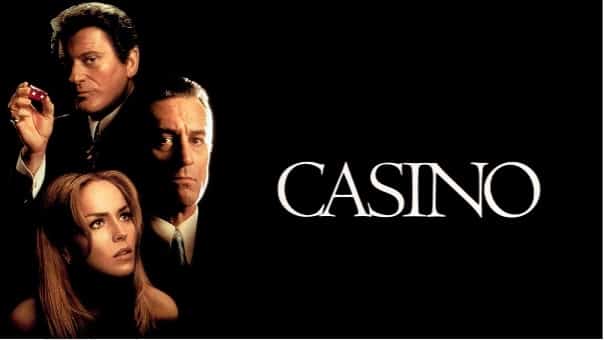 Adapted by Martin Scorsese from a true story, Casino chronicles the rise of Sam “Ace” Rothstein, a brilliant gambler turned casino manager for the Mafia and his subsequent dramatic fall from grace. An all-star cast, including Robert de Niro, Sharon Stone, Joe Pesci and James Wood, give solid performances in an irony-tinged tale of violent crime, corruption and betrayal.

Nicky Santoro (Joe Pesci), Sam’s childhood friend and now a Mafia enforcer, is sent to Las Vegas to protect Sam and the growing casino. While Sam runs a daily casino business, Nicky violently ‘deals with’ people who cheat or who owe money and don’t pay up.

Unfortunately, although Sam warns his friend to keep a low profile in Las Vegas, Nicky is a loose cannon. After cheating leads to Nicky being listed in the Nevada Black Book, a total ban from the premises of every casino in the state, he puts together a criminal gang. The gang’s spate of house-breaking and jewellery thefts draw unwanted police and media attention.

Meanwhile, Sam meets and falls in love with Ginger McKenna (Sharon Stone), a dancer, hustler and ex-prostitute still entangled with her long-term boyfriend/pimp, Lester Diamond (James Wood). Sam and Ginger marry and have a daughter, Amy, but their relationship descends into turmoil, in part due to Ginger’s ongoing association with Lester Diamond. Sam has Nicky’s gang beat up Lester when Ginger gives him $25,000.

Sam also runs foul of local politicians. After he fires incompetent slot manager Don Ward, Ward’s politician brother-in-law, Pat Webb, tries to convince Sam to rehire Don. When this fails, Webb arranges for Sam to be denied a gaming license, putting his casino position in jeopardy. Sam blames Nicky’s reckless behaviour for ongoing police pressure and his problems with the Nevada Gaming Board.

With their marriage self-destructing, Ginger turns to drugs and alcohol, and after Sam seeks a divorce she plans to kidnap Amy and flee with Lester. Although Sam persuades her to return, Ginger plots to have him killed.

Over the course of the film, we see Sam’s career and most important personal relationships heading towards an inevitable meltdown. Despite the opening scene where we see Sam being blown into the air by a car bomb, he is still alive at the end of the film, working once again as a gambling expert, right back where he started…

The ‘true story’ behind Casino

The casino is based on a 1995 book “Casino: Love and Honor in Las Vegas” by Nicholas Pileggi, who also co-wrote the film’s screenplay along with Martin Scorsese. Pileggi decided to write about mob activity in 1970s Las Vegas after being inspired by 1980 newspaper coverage of domestic strife between casino figure Frank “Lefty” Rosenthal and his wife Geri McGee.

The movie is not a direct ‘true story’ but its characters and events are loosely based on or adapted from, real people and happenings, often simplified for narrative clarity. For example, Frank Rosenthal did survive a car bombing incident. Geri McKee did have an affair with Anthony “Tough Tony” Spilotro, the casino’s mob enforcer on whom the character of Nicky Santoro is based. McKeedid eventually die from a drug overdose.

Similarly, the fictional Tangiers casino resort reflects the Stardust Resort and Casino, which was believed to be controlled by Midwest organized crime families in the 1970s.

Over six years, a skimming operation at the Stardust Casino reportedly siphoned off $7-$15 million, the largest ever exposed by the FBI at the time it was uncovered, leading to the successful prosecution of several organized crime figures.